Doug and I are swashbuckling adventurers who explore unknown lands and conquer all we cross. We don’t have swords, gold, or ships. I can’t grow a beard. Doug has a magnificent beard, but he only stands eight inches tall. At over six feet myself, we make quite the fearsome duo… to nobody but ourselves as we stumble over logs, slide down hills, and avoid the glass shards left by humans in the forest.

Magic happened today at the river. As spring awakens the woodlands, the Fae have been letting me know they trust me. It’s taken time and effort in a place where few pay attention to the others around them. The gnomes started grabbing my attention after watching me take trash out of the woodlands each day.

Today, one called out as I rose from the banks of the river to walk the woodland trail.

He yelled, “Come over here. We have something for you. On the ridge.”

The river nearby floods often. It’s a swampy woodland with beautiful fungi, rotting trees, and carnivorous plants by the boatload.

The gnome stood in the distance. “But you have to come now. Otherwise you might not. Don’t wait.”

He wasn’t wrong. I live with a very “now” state of mind. If I don’t do something right away, it passes into memory because it doesn’t affect my now state of being. It happens in the woods often. I’ve even taught the woodland spirits to make sure they tell me, “Come now.”

So I walked to the ridge in swampy lands I didn’t want to hike today. Today was supposed to be an easy hike. But I like my friends more than my ease. 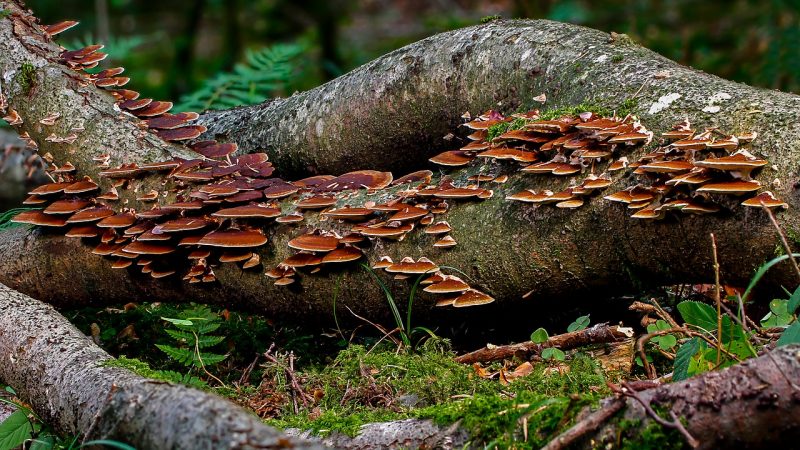 The gnomes talked with Doug. “He’s going to love it when we show him!” They were full of excitement.

Doug and I followed the gnome, several in fact, to the ridge. They climbed to a shelf where giant trees had fallen, crushing their brethren below.

“By this tree?” I pointed to an enormous tree that was rotting, covered in fungi as it returned to the earth. 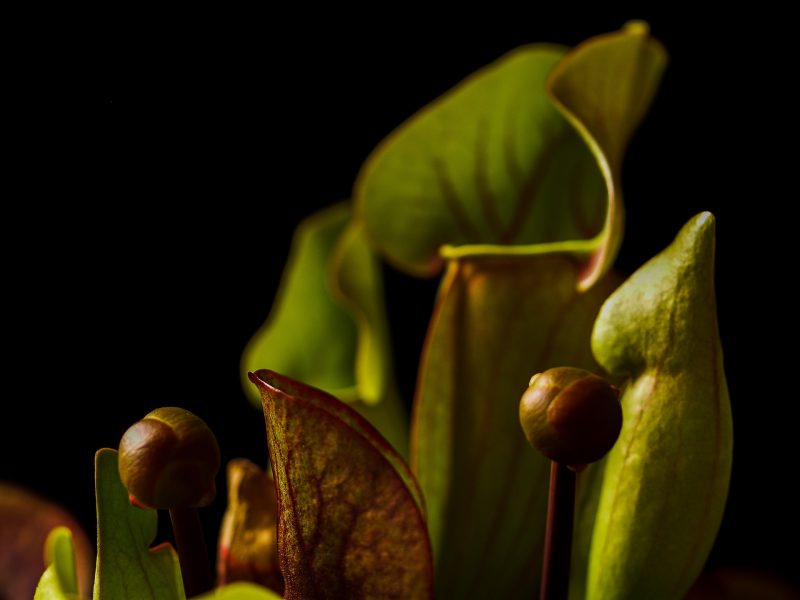 “But there’s nothing here.”

I started looking around the tree. Nothing. Just regular woodland stuff.

A gnome walked over to a tree on the shelf in the distance. They looked around the ground.

As they searched, I turned around several of the crushed branches to find some of the most beautiful fungi formations I’ve ever seen. They curled in the shapes of circles and hearts with stripes of brown, green, and white. Sea green lichens adorned the tree and the fruiting bodies of the fungi lifting from the dead bark. 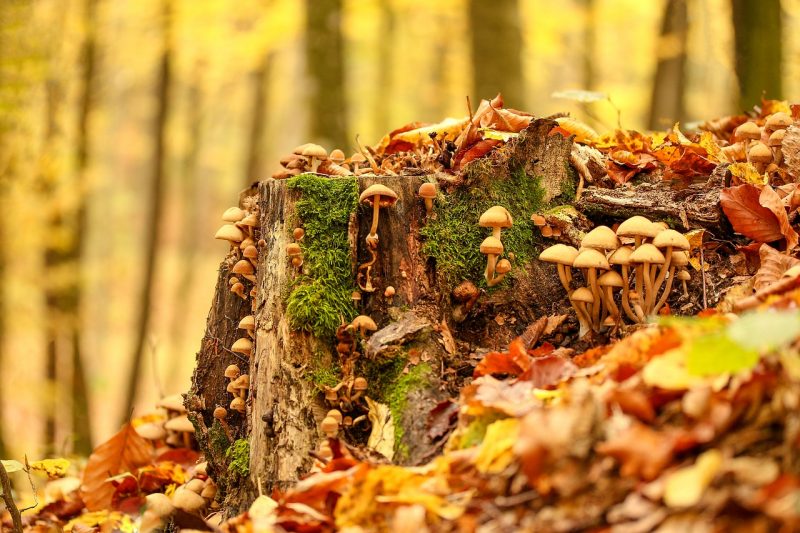 “Uh, okay. Either way, this is beautiful!” I enjoyed the fungi for several minutes.

Sidebar: If you are interested in fungi, check out this excellent book, Entangled Life: How Fungi Make Our Worlds, Change Our Minds, & Shape Our Futures, that will prove to a conscious reader that fungi are extremely conscious. They hunt, steal, share, and even manipulate their own DNA to survive.

The other gnome called me over. I walked to the tree they stood by. Right at the base was the lower jaw of a small animal. 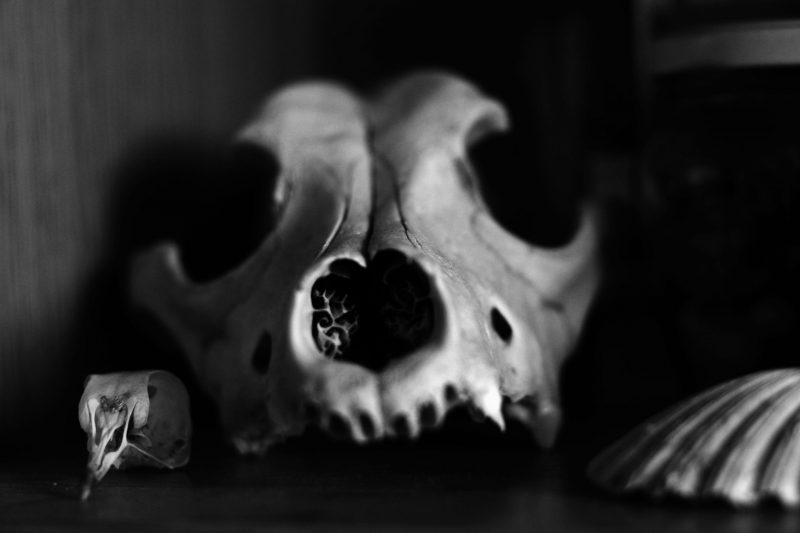 They said, “See! It was by the tree! We forgot where.”

And it was right by the base of a tree. Lady Death wants me to bring more skeletons, especially skulls, home in honor of the death work we do. Just a few days ago, I found the jaw of a canine by the river after the river spirit told me, “Turn around, there’s a gift for you.” I turned around. Two inches from my feet was a canine jaw buried in the sand for ages.

The gnomes must have seen this. They were around that day as I collected trash. Several led me to bottles in the woods.

Now, they are searching for bones to give me. After they gave me the small jaw, they I continued onward to see my other friends.

The gnomes waved goodbye and said, “We’ll look for more things to give you when you return.” They immediately went to work searching the woodland floor.

It was a magical day.

Maybe the two means something, maybe not.

Either way, magic exists in this world. Friends, invisible to the physical eye, are all around us if you want to accept them into your life. Doug and I had a lovely time in the woods on a simple adventure exploring swampy lands for other things. Having his energy around helps the Fae accept me in unknown places.

It brings magic, real magic, into our lives. Doug and I have many adventures to share, much more magical than a simple gift in the woods. Stay tuned.

In the meantime, check out that book » Entangled Life: How Fungi Make Our Worlds, Change Our Minds & Shape Our Futures, I finished it a few weeks ago, and I still can’t get the image of fungi hunting and harpooning worms out of my head… among all the other fascinating info.

Why Are Humans Afraid… of Me? Communicating With an Insectoid

There was a time when I didn’t believe in the existence of so many beings. Like Mulder in The X-Files, I wanted to believe. I believed in some possibilities, some beings. Sasquatch, bigfoot, check. Short, grey aliens… probably. Loch Ness monster… probably. Goblins, gnomes, elves… are you crazy? Then My

Why I Use a Pen Name, an Intuitive Experience.

My real name is not Willow Shire. Willow Shire is a pen name derived from several of my favorite things: Willow Rosenberg, a character on Buffy the Vampire Slayer Willow Ufgood, the main character of the 1980s fantasy film Willow Willow trees as I’ve always loved these gentle giants Shire

A Bizarre Extraterrestrial Experience There exists a place, an enormous ocean, lit by the blue glow of millions walking the seafloor. When I popped over in my astral form, I was met with a singular being standing on a rock beaten by waves. The crab stepped back. Then proceeded to